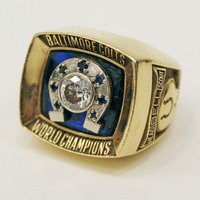 Upton Bell is a former National Football League executive and currently a talk show host and commentator. He is the son of former National Football League commissioner Bert Bell and Broadway actress Frances Upton. Born in 1937, he watched his legendary father both own and coach the Philadelphia Eagles and co-own the Pittsburgh Steelers, serve as NFL commissioner from 1946-1959, and institute a massive modernization of the game. His grandfather, John C. Bell, was second in seniority on the Walter Camp Intercollegiate Football Rules Committee which set all the rules for college football. John C. Bell assisted Camp in negotiating with President Teddy Roosevelt on saving the college game after a number of players died while playing. He also helped found the modern NCAA. 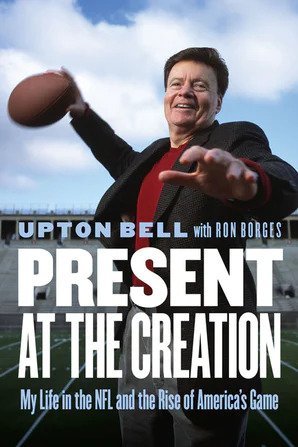 Bell began his own football career in 1960 with the Baltimore Colts, moving his way up from training camps and the ticket office to the scouting department where he became personnel director. In this position, he scouted, negotiated with, and signed contracts of all college recruits, working with legendary Hall of Fame coaches Weeb Ewbank, Don Shula, and Chuck Noll.

At age 33, Bell became the NFL’s youngest general manager as he was hired as GM of the Boston Patriots. One of his first moves as general manager was to suggest to the Board a name change from the short-lived Bay State Patriots to the New England Patriots, which would encompass the six New England states as the team moved to Foxboro. Bell also implemented the Patriots' first scouting department, helping the team improve from 2-12 to 6-8.

Just three years later in 1974, he made his next career move to a rival league, the World Football League. He negotiated with the New York Stars to relocate them. After moving the team to Charlotte, North Carolina, now as owner, Bell changed their name to the Charlotte Hornets. Notably, one of Bell’s co-owners was renowned golfer Arnold Palmer. At the time Bell also negotiated a deal with Ted Turner to televise all of the Hornets games. This venture was short-lived with the collapse of the WFL in 1975, but the legacy of the team lived on with many players and all of the coaches signing with the NFL. Bell also recommended Charlotte as a franchise city to the NFL.

The following year, in 1976, Bell was just beginning a long media career with guest appearances on various programs. One year later, he was named host of the Pats Post Game Show on local Boston radio, where he soon also joined Calling All Sports and various other Boston sports shows. 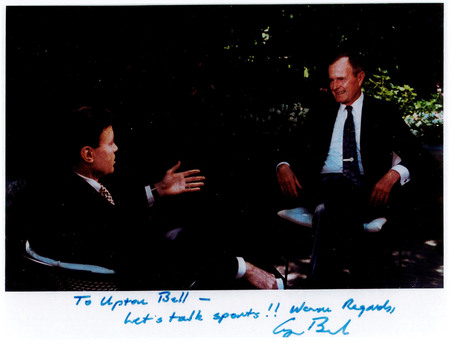 In addition to his radio personality, Bell served as color commentator for the Boston Breakers on ESPN, the Boston College Eagles, and the Boston Celtics, and was the studio host for Sports Channel New England’s nightly talk show.

In 2019 Arlington (Mass.) Community Media Inc. produced a nine part documentary on Upton Bell and his family that is available online. Here is part one of Football's Storied Past.